Mathematics of the Eye of Horus Different parts of the Eye of Horus were thought to be used by the ancient Egyptians to represent one divided by the first six powers of two:
If that's a little confusing, here's what it would look like if drawn out in a square:

According to some schools of thought these divisions are also believed to have represented the various senses as shown in the image below: 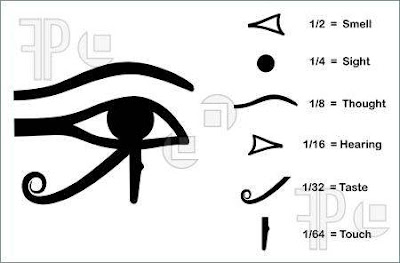 Email ThisBlogThis!Share to TwitterShare to FacebookShare to Pinterest
Labels: Eye of Horus, Mathematics

Thank you so much for sharing your thoughts and ideas here. You are appreciated!